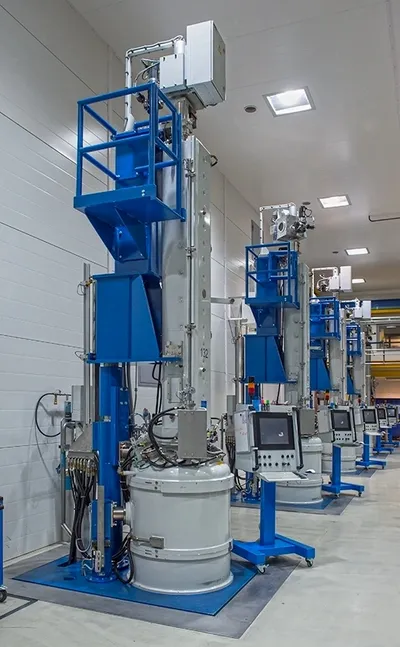 “While serving as President of Magna Powertrain NA, Robert and his team supported us with the auction and disposal of a significant assets base associated with a 1.6 million square foot factory in New York. He served us brilliantly. His team over-delivered on their objectives with a great deal of professionalism and integrity. Robert proved he could maximize the value of the assets in the time window we needed to support our fluid industrial plan that spanned a thirty month period. He will be the first person I call for my next asset sale/auction.”

“My experience with Robert spans more than a decade and, together, we have been engaged in selling my personal businesses and monetizing many other substantial and well-known assets along the way. In the auction industry, that often times can be difficult to navigate with confidence, Robert brings a level of ethics and integrity that is unquestioned among his peers. Equally as important, Robert thinks out of the box to find creative ways to drive value through alternative markets or transaction structures and is willing to take measured risks to the benefit of the client.

Robert and I have worked on more than $100 million of transactions over the last decade, which includes several high-profile assets associated with the Chrysler bankruptcy. The Chrysler engagement, in particular, required maneuvering through a labyrinth of conflicting priorities from locally-affected municipalities to the Federal and State EPA, the Federal Bank, the Canadian government and other parties – and Robert demonstrated a degree of patience and thoughtfulness to get through these hurdles and successfully complete each of the transactions.

Robert also knows when to bring in other parties that would be accretive to the transaction and complement his skill set. I have worked with Robert on several matters where he “partnered up” to the clear benefit of the client. Robert is broadly connected and respected throughout the business community and is willing to draw on his relationships when needed.

When assets need to be monetized upon, he’s the best when it comes to ethics, integrity and creativity. He may not be the cheapest, but you certainly get what you pay for! “

“I endorse Robert as a creative, thoughtful business partner. While at GE, one of my tasks was to dispose of the assets of a completed GE venture. I elected to work with Robert due to his rigor and professionalism in evaluating the assets and due to his capabilities in executing the liquidation. Once the project was underway, I approached him with highly non-traditional proposal that would significantly alter the terms of the liquidation plan. Robert didn’t say, “No.” He had the creativity to see the increased benefit for both his company and his client (me) in exchange for taking on more risk. In the end, we were able to negotiate a deal. His team’s financial estimates proved extremely accurate, his team executed as agreed, and both sides benefitted as expected. I would not hesitate to work with Robert again, and I highly recommend him. “

I have interacted with Robert Levy for over a decade and have seen him in action during several asset sale client assignments in the solar panel industry. Supported by years of strong growth of the demand for solar panels, producers had been focused on how to install new capacity, never on decreasing installed production capacity. A tipping point was reached unexpectedly, and companies such as Evergreen, REC, Unisolar and Solyndra had to declare bankruptcy, while others had to cut production capacity as soon as possible.

Being the go-to person in the asset disposal world, Robert was contacted by such companies to offer solutions to dispose of production assets, realizing highest possible proceeds within a shortest possible timeframe. Robert Levy assessed the clients’ situation and decided that it would be wise to augment his solar industry product knowledge. That is where we became part of Robert Levy’s team. Having worked in management consultancy for almost twenty years at that point, I had the opportunity to work with Robert on numerous projects and here are my observations:

I would like to end by mentioning the capstone of it all: key to the successes achieved and to be achieved in future, above and beyond the team’s experience, know how, the efficient processes and organization: Robert Levy himself. He is the best businessman I have seen in action during my thirty plus years of professional experience. If you need to monetize assets, nobody will find better ways to do it than he, and he will deliver as promised or even better.

If Robert Levy tells you he will go to the ends of the Earth to get a deal done, believe him. I have done many deals with Robert since he gave up making jewelry in London as a kid and joining his father in the auction business 35 years ago.

My deals with Robert have been comprised primarily of mundane metal turning equipment, but Robert loves to talk about some of his crazier deals like selling the fish cannery on Adak island, the last of the Aleutian chain in Alaska, and a stone’s throw from Russia. Adak is 1269 miles west of Anchorage.

Appropriately named, Icicle Seafoods, had taken over a 250,000 square foot seafood processing plant in 2007, but by the time Robert had gotten the call, they were in default on their loan. Robert Levy’s client was the Rhode Island bank that held the paper and the USDA that guaranteed the loan.

When he took on the challenge of Adak and Icicle, he almost immediately flew straight to Anchorage and then waited for one of the two flights a week to Adak to check out the factory that he was supposed to sell.

I know Robert is usually impeccably dressed and likes to travel first class, so flying to Adak on a plane that was a combination passenger flight and freight hauler must have been a bit of a shock, but anything for a deal. There was no hotel in Adak so he stayed in an old Army barracks. Food was available at only one place, a combination grocery, gas station, and bar and grill, known as the ASBAG.

Robert thought he had a good shot at selling the factory to a Chinese firm, but they backed out at the last minute, but somehow, Robert actually did hold an auction sale, and to the amazement of everybody but him, he sold the place for a satisfactory price. He also took some magnificent photos, collected wonderful memories and got a terrible case of diverticulitis putting him in the hospital when he arrived in Detroit. He ate too many bad local sunflower seeds on the island.

If you have a deal that nobody else has the stomach for or the experience to tackle (or a simpler one, too) Robert Levy is your guy.

Robert is an amazingly genuine person, whose goal is always centered around his clients. Robert is always first to ask, “How can I help” and is overflowing with ideas for possible solutions. This was evident the first time we worked together on The City of Detroit bankruptcy restructuring, the largest municipal bankruptcy to date. Robert assisted us with figuring out how to maximize the value of a variety of city assets through a combination of sales, which included negotiated sales and auctions. Robert created a customized solution, tapping all the right networks with his marketing efforts gaining interest from participants all over the world creating a bidding war on the assets, maximizing the return on the assets. The money generated from this effort enabled us to re-invest in new equipment and fleet.